Somewhere Over the Rainbow-Washing: Responsibility in Pride Month Marketing 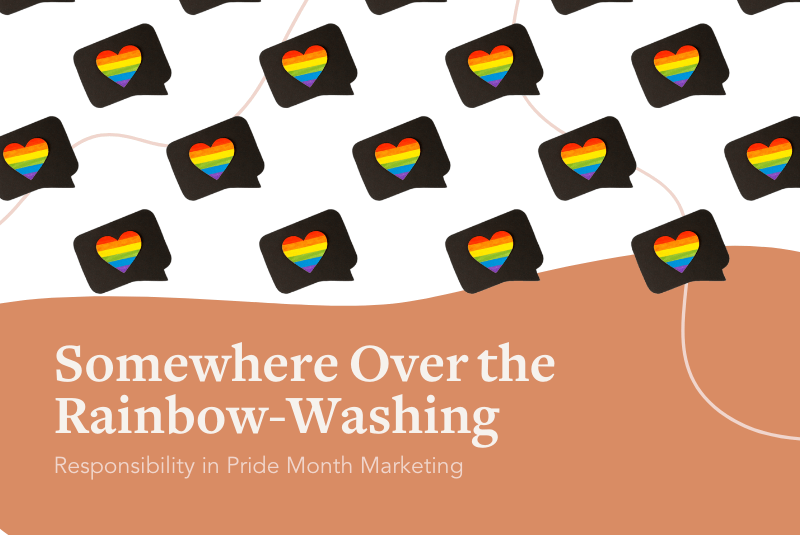 Nearly 30 years ago, Ikea launched the first commercial campaign featuring a same-sex couple, triggering bomb threats and boycotts as a result of two men in a relationship discussing their new dining room table.

The furniture’s optional leaf addition meant something to them—subtly hinting at their dreams of building a family who will eat there one day, and inviting one of their sisters over for a meal together. Her recent wedding, it’s revealed, was where they met, though the men wouldn’t be able to celebrate their own nuptials for another two decades.

Today, ads centering around LGBTQ+ characters are far more frequent. After lifetimes of violence and suppression of people who identify as lesbian, gay, bisexual, transgender, and queer, Pride now encompasses celebrations, political action, parades, and so much more. While each community is different, June, primarily, has been dubbed Pride Month throughout the United States.

It is for this reason, along with the fact that LGBTQ+ people around the globe have an annual buying power of around $3.7 trillion, that we see more companies coming out in support of Pride this time of year.

Just as Earth Day appears to spark sustainability efforts throughout the corporate world every April, Pride Month seems to inspire big businesses to support the LGBTQ+ community. Unfortunately, this is often done simply by slapping a rainbow flag on a corporate social media account, marching with employees in a local pride parade, or any variety of other seemingly supportive stunts without real, meaningful action. Dubbed “rainbow washing” by LGBTQ+ activists, the phenomenon exploded when corporations realized that the backlash they would face for LGBTQ+-directed advertising was less than potential profit they’d gain as a result.

Notable examples of rainbow washing include Googles Pride-themed home page but protocols allowing advertisers to exclude non-binary people in their targeting. Companies like Comcast/NBC Universal and United Healthcare recently came under fire for donating to Florida politicians who support a bill that would prohibit discussions on sexual orientation and gender identity with younger classrooms. And yet, Comcast/NBC Universal marketed their own “virtual Pride world” in 2021 and United Healthcare has been awarded a perfect score on the Human Rights Campaign’s “Corporate Equality Index” several times.

“Businesses need to stop profiting off our flag—placing it on their products educates and challenges no one,” argues UK journalist Georgia Mooney. “The history and symbol of queer people isn’t something you can sell.”

As marketers, we know that communications campaigns can carry far more context than just “buy our product.” Ads have the power to shape public perception, for better or worse. A survey of 10,000 respondents found that more than 27% of consumers wanted to see less LGBTQ marketing during pride month; but nearly 70% of homosexual people admit to being positively influenced by ads that contain gay and lesbian imagery. Another survey revealed that LGBTQ+ adults believe pride events are important to making society more accepting, but not as important as things like knowing someone who is LGBTQ+ and seeing LGBTQ+ public figures. About three-quarters of LGBTQ+ adults think Pride events help make society at least a little more accepting of the LGBT population, with about 28% of respondents believing that Pride events help “a lot” with social acceptance.

This is why performative Pride is so tricky. One could argue that publicly showing support of LGBTQ+ causes is a good thing. These statistics prove that it is powerful to simply say you support Pride. “Equality means more than passing laws,” says Barbara Gittings, prominent LGBTQ+ activist. “The struggle is won in the hearts and minds of the community, where it really counts.”

The problem is too many Pride month campaigns come off as genuine attempts to win over communities, when in reality they are hollow, calculated gestures to win over new customers.

Companies simply must be better about putting their money where their marketing is. It is no longer acceptable to co-opt a movement that, at its core, is not about your business, no matter how well-intentioned or well-reasoned a campaign may be. Furthermore, it shouldn’t fall on the customer to magically discern whether or not a brand’s actual attitudes toward Pride are about empowerment or profit.

Before proposing a Pride campaign, consider this: Will LGBTQ+ people be included in our decision-making processes and compensated fairly for doing so, not just during Pride, but year-round? What other actions can we take to advance the agendas of LGBTQ+-led initiatives and meaningfully express our allyship?

It is possible to publicly support Pride-related causes while welcoming LGBTQ+ people into your company mission. Fashion retailer H&M donated thousands of dollars to the United Nation’s Free & Equal campaign and launched an app for LGBTQ+ to share their stories. Skittles’ all-gray “Pride Packs” gained attention for featuring colorless candy and packaging meant to highlight “only one rainbow matters during Pride month.” The company donated $1 for every pack purchased to GLAAD, which works to stop defamatory media coverage of LGBTQ+ people.

Perhaps it falls on us marketers to ask the hard questions, to probe into whether our public brand personas match with the heart of the brand. In the words of Tammy Baldwin, the first openly gay senator in United States history: “there will not be a magic day when we wake up and it’s now okay to express ourselves publicly. We make that day by doing things publicly until it’s simply the way things are.”