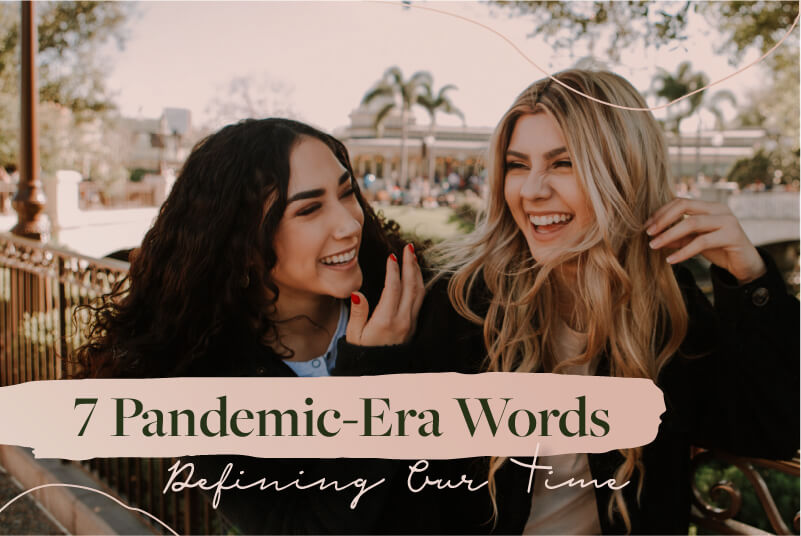 I’ve always been fascinated with language. The ways it changes, the ways it stays the same. The way that a word can be a time capsule of sorts, its meaning and form a reflection of the time in which it was created.

To use what is perhaps the most cliche cliches of our current historical events, “now more than ever,” when a global pandemic has touched nearly every industry and affected nearly every person, I am fascinated with the way our words continue to form and change.

To help memorialize the wondrous words of our time, we’ve put together a list of words we love that have either emerged for the first time or evolved over the last few years.

Named the Oxford English Dictionary’s word of 2021, “vaxxed” is used to describe whether or not someone is vaccinated against COVID-19. “Vaxxed” is a derivate of the slang “vax,” which is short for vaccination. Oxford English Dictionary notes this word’s history dating back to as far as 1799, as well as it’s versatility – the root of “vaxxed” can also apply to popular new terms like “anti-vaxxer,” “vax-a-thon,” and “double-vaxxed.” 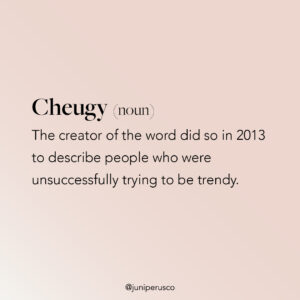 I’ve got a love-hate relationship with “cheugy.” On the one hand, I can appreciate calling out the calculated mass-marketed trends that take advantage of women’s immense spending power and the inaccessibility of these trends, thanks to the ever-changing trend cycle. On the other hand, let 👏 women 👏 be 👏. According to a New York Times article, the creator of the word did so in 2013 to describe people who were unsuccessfully trying to be trendy. After TikTok got ahold of it in 2021, debate sparked as to whether it was harmful comical slang or if using it the word itself was, well, cheugy.

“Hybrid” has been around for a while, but the way this word has changed over the past few years is certainly worth noting. Previously, “hybrid” was simply an adjective applied liberally to a variety of situations. Today, say “hybrid” and it will most likely be understood as a combination of home and in-person based events, mostly with relation to school and/or work. 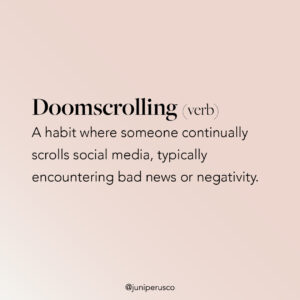 Why does anything with the word “doom” in it sound vaguely like an animated super villain? Then again, maybe visualizing “doomscrolling” as a sort of quirky bad guy would help to curb it. “Doomscrolling” is a habit so many have engaged in, especially since March of 2020. It occurs when someone continually scrolls through social media, typically encountering seemingly endless sources of bad news or negativity. Also known as “doomsurfing,” it makes the list because I like the idea of epitomizing the modern bad habits that should be avoided.

Another word on our list whose definition has changed dramatically as of late. “Pod,” interchangeable with “bubble,” can be defined as the group of people someone spends time with, physically, in the real word, off Zoom. The reasoning behind it was pure, in that establishing a “pod” was meant to prevent the spread of COVID-19 and keep physical contact within a small group of people. As social and lifestyle structures change, there’s something inclusive to be said for expanding the definition of someone’s close group of people to beyond family and friends.

Our apologies in advance to anyone named Karen, but “Karen” makes our list. Used to describe those who exhibit public uproar, usually over minor inconveniences and usually at the cost of others, a “Karen” is a term that’s much needed in today’s call-out culture. It’s also worth noting that “Karens” are usually white – yet another reason we think this term is deceptively critical. Confronting those who have historically taken advantage of a lack of social retaliation in order to exert power over those they deem less than is, while uncomfortable, important. 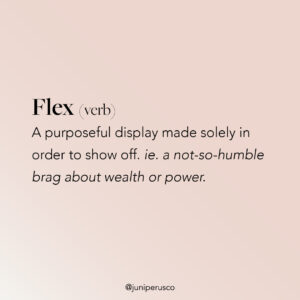 Again with the calling out of toxic social media trends. A “flex” is something put on display solely in order to show off. While most commonly exhibited on social media with a not-so-humble brag about wealth or a good deed, “flexing” can also be done in person with a casual name drop or mentioning some massive achievement as if it’s NBD. “Flex” gained popularity within the context of the phrase “weird flex, but ok,” which this writer once heard when she mentioned she actually enjoys researching the etymology of modern slang.

Honorable mentions for this list go  to “cap”/”no cap” for modernizing every millennial’s favorite middle school modifier of “honestly,” “fit” for saving us the .05 seconds it takes to say the full “outfit,” and “fire” – because it just sounds cool and makes us feel real hip when we say it in front of anyone under the age of 20.